WATCH NOW: What are the latest findings in Q1 2017 for the sales and lettings markets? With the uncertainty surrounding Brexit and a general election planned for 8 June, Marcus Dixon brings you up-to-speed with all you need to know in our latest LonRes Lowdowns. 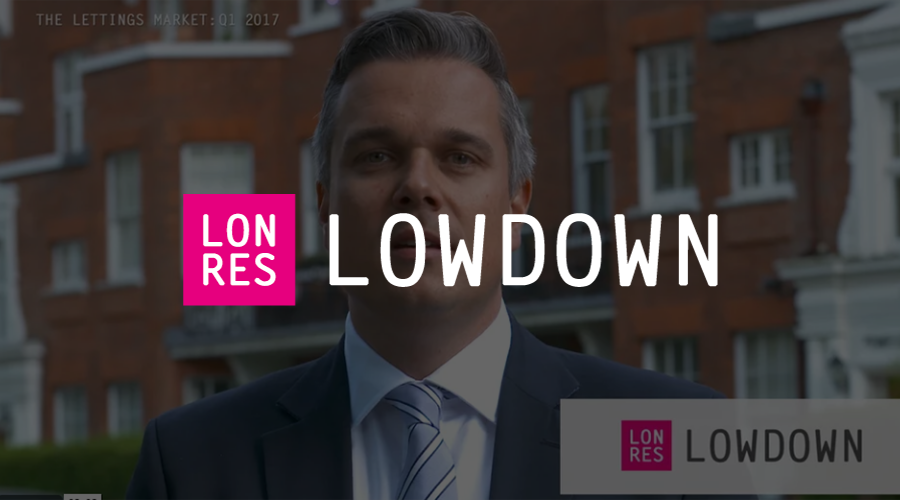 Find the latest analysis on London's sales and lettings markets in our LonRes Lowdown, your one-stop guide for all the latest trends and analysis on the prime London markets.

Marcus Dixon, our Head of Research, updates you on all you need to know from the previous quarter. Click the links below to watch our 2-minute updates:

COMING SOON: LonRes Residential Review Spring 2017 issue. In the meantime, catch up on all the latest resources from LonRes here.

Since October prices across our three prime areas have plateaued. While some buyers are taking this as a sign the market has bottomed out, others still continue to confidently negotiate on asking prices. Discounts on initial asking prices have averaged 10% so far this year.

And as for sellers, some are still struggling to price their properties competitively. Our analysis shows that almost half the homes currently on the market have been reduced in price.

The number of homes sold between January and March were, as expected, down on Q1 last year.  As you’ll remember last year, stamp duty changes introduced in April 2016, resulted in a high level of deals being pushed through in those first three months. This makes drawing annual comparisons difficult. The 26% annual fall in sales this quarter, rather reflects an abnormal market last year, than a significant slowdown this.

In fact the market does seem busier. In prime central London, the number of properties going under offer between January and March was just 9% lower than in early 2016. This suggests we could expect an increase in transactions over the next couple of months, if election wobbles don’t impact the market too much.

Unlike the lettings market, the sales market hasn’t seen a spike in new instructions this year. In prime central London there are now just 2% more properties on the market compared with the same point a year ago.

The market is still suffering from a lack of urgency. Buying costs and unrealistic expectations on price still leave some vendors questioning whether to sell at all. This has meant withdrawal rates have increased now for four consecutive quarters. With the first three months of 2017 seeing withdrawals increase by 15% on the same period a year ago.

Over the next few months uncertainty over the impact of Brexit on the prime housing market will impact buyer activity.  On top of this, the recently announced general election in June, could further distort the market in the second quarter.

Our survey shows LonRes subscribers remain cautious about the prospects for growth over the next 12 months.  That said, almost half are expecting to see transactions rise, and one in five expected prices will increase. We’ll wait and see.

The number of properties let across prime areas of London continued to increase this year.  In the first quarter there was a 16% increase in lettings across our three prime areas, compared with Q1 2016. All price bands recorded higher volumes of properties let, but it was the top and bottom end of the market where we saw the most significant increases. The number of lets below £500 and over £3,000 per week, both saw an annual increase of almost 30%.

Despite a busier market, an increase in new instructions, which we first noticed start to build last summer, continued to put pressure on rents. Prime central London was the only one of our three markets where new instructions plateaued. Prime London and prime fringe both saw increases. With a 16% rise in the number of properties reaching the market in prime London and 18% more in prime fringe compared with the first quarter last year.

This is good news for tenants, with a greater choice of properties and opportunities to negotiate on asking prices.  But for landlords, particularly those keen to avoid lengthy void periods, they must be prepared to price competitively to attract tenants.  Scruffy or overpriced properties risk being left on the side lines as prospective tenants look elsewhere.

Looking ahead our survey suggests agents are bracing themselves for further falls in achieved rents in the coming months, as excess stock is absorbed.  Landlords will be hoping that the uncertainty over Brexit and the announcement of a general election in June will support demand for rental properties in central London. Something we’ll be keeping an eye on over the next couple of months.