Percentage of lets achieving their initial asking price or higher 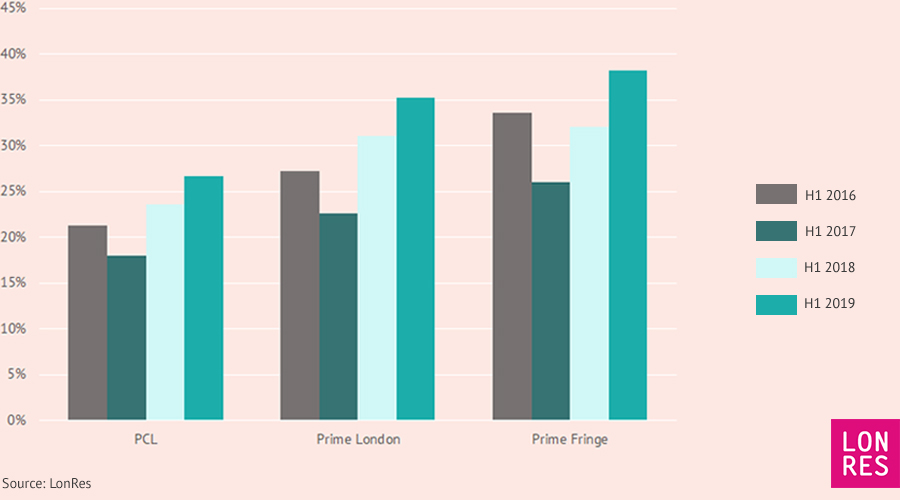 What does the chart show?

There are many metrics that LonRes use to track the health of the lettings market. One is the proportion of properties where rents either achieve or exceed their initial asking price. And this is what the chart shows.

The analysis takes in the LonRes three prime areas of London* and compares the first half of 2019 with the previous three years going back to 2016, the year of the EU referendum.

One reason is lack of stock. Political uncertainty and higher taxation on home purchases has driven more would-be buyers to renting. And, tenants are staying longer too which means fewer properties are coming back to the rental market. Combine this with a reduction in new buy-to-let stock (as the impact of increased taxation on landlords works through the market), and what we’re seeing is less choice and more competition among tenants.

What does this mean?

Lack of supply and increasing demand essentially means that more properties achieve their asking price and rents continue to rise. And this is what we have been seeing. In Q1 2019, the LonRes prime London lettings index recorded its sixth consecutive increase in achieved rents compared with the same quarter a year earlier. Gross yields are improving too.

If you would like to learn more, or use LonRes data in your own marketing, do get in touch

Further charticles and publications you may be interested in: