Keep track of the latest market movements for Q3 2017 - how does this compare to the previous year? Watch to find out by clicking the link below. 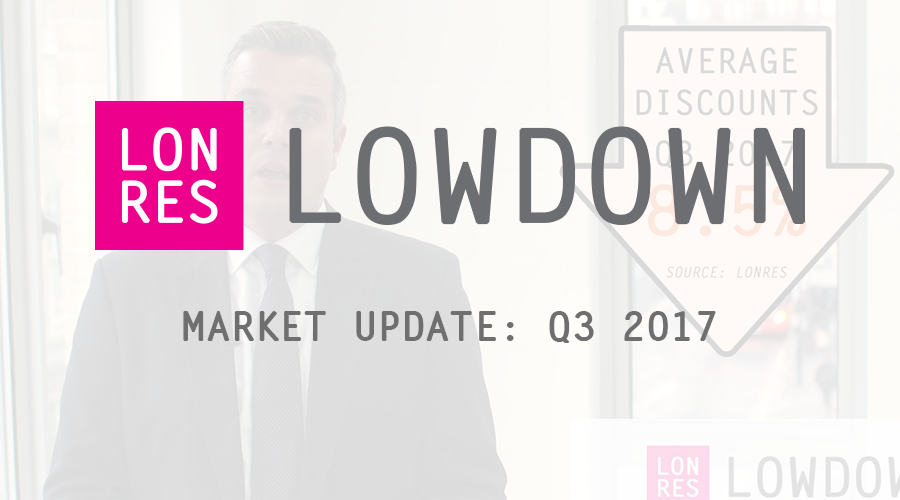 The sales market has proved to be more resilient than many expected, given the challenging conditions that agents have had to contend with over the past twelve months. Lettings also saw a busier quarter compared to the previous months. We also bring you a quick update on market sentiment from our subscribers - enjoy.

Don't forget, you can sign up for the latest property news and LonRes updates.

London’s prime markets have proven more resilient than many expected over the last 12 months.

At this point a year ago, two thirds of agents we surveyed expected that sales volumes would fall over the next 12 months. Volumes are still low, in a historic context, but transactions across our three prime areas increased in the third quarter, up 6% compared with the same period a year ago.

Achieved prices remain within 1% of last year, with prime central London seeing a modest fall of 0.3%.

Despite some vendors still holding out for high prices, the gap between vendor and buyer expectations is narrowing. Average discounts on initial asking prices have fallen, down from 9.1% a year ago to 8.5% in Q3 2017. The number of properties needing a reduction in asking prices has also fallen.

Now, more than a year after additional property stamp duty was introduced, 49% of survey respondents had seen a reduction in investor and second homes buyers. But the market under £1million, popular with investors and second home buyers has adapted quickly. Achieved prices down 4% since the introduction, meaning the additional stamp duty burden is covered

Looking ahead, our subscribers are still cautious.  But tracking agent expectations through our quarterly survey shows many now doubt prices will fall significantly over the next year. Just 14% of respondents this quarter expected prices to fall by more than 5% over the next 12 months, down from 46% in the second quarter last year. Let’s hope this continues.

The third quarter again proved the busiest period for the prime lettings market. Properties let rose 5% across our three prime areas compared with the same period last year. The fourth quarter in a row where we saw an annual increase in new lets agreed.

Rental values which had seen a series of quarterly falls rose by 1% in the third quarter compared with the previous three months now 1% lower than the same period in 2016.

Homes let for £3,000 per week or more saw the highest annual increase in new lets, with volumes up 13% on the third quarter last year.

More activity in the prime lettings markets has seen confidence return. Agents are more optimistic about the rise in new lettings, with just 22% expecting the number of new lets to fall over the next 12 months.

Sentiment has also improved on prospects for rental growth. In our latest survey, the number of respondents expecting rents to fall by more than 5% dropped again this quarter, down from 21% in the first quarter of the year 10% in Q3.  Let’s see how things pan out for the rest of the year.