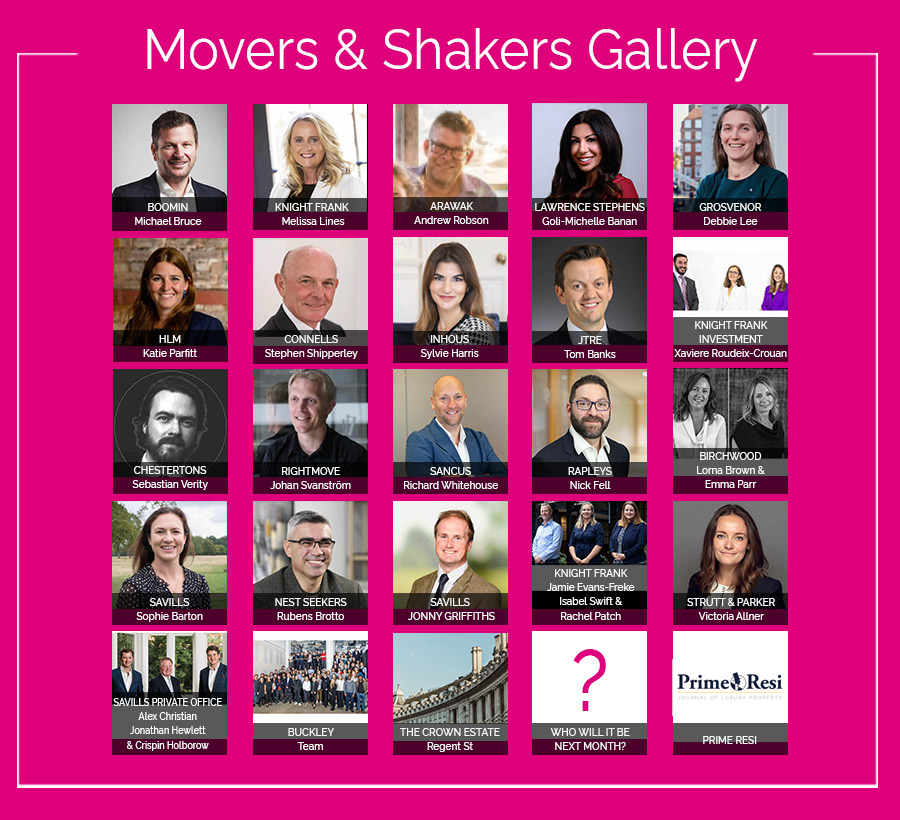 Jonathan Hewlett has taken on the mantle of Chairman of The Savills Private Office, in addition to his other roles (which include Head of London Residential), while Alex Christian and Crispin Holborow are Joint Heads, responsible for the division’s day-to-day management of the specialist division, which was created by the late David Forbes in 2007. Read more

Nest Seekers International has appointed a new London-based Managing Partner to lead its “strategic expansion” across Europe. In just two years, Rubens Brotto has been promoted from individual broker to Managing Partner of the commission-only international estate agency. Brotto previously worked in investment banking and data analytics on Wall Street in New York, and in Rio and London. He had not worked in the property sector before moving to the UK and joining Nest Seekers at the start of the pandemic, in early 2020. Read more

BNP Paribas Real Estate and Strutt & Parker have appointed Victoria Allner as a Director for the Private Client department, which is run by Alexander Millet.  Allner has been with Strutt & Parker for over six years, most recently as Senior Associate Director in the London Residential Development & Investment team. Read more

Influential property industry veteran Stephen Shipperley has announced that he will step down as Chair of Connells Group, 45 years after joining the estate agency in Aylesbury in 1977. Read more

Savills has promoted Sophie Barton, an associate director in its Wandsworth sales team, to Head of Residential Sales at the East Sheen office. Read more

Savills has also recruited a farmland specialist to spearhead a global expansion of the division. Jonny Griffiths has joined in the new role of head of international farmland. He has spent recent years at Nuveen Natural Capital, working on investment strategies, origination, analysis and due diligence for farmland transactions across Europe and into California, Australia and Brazil. Read more

Knight Frank has recruited three former Strutt & Parker directors as part of a strategic rollout of its rural consultancy offering. Jamie Evans-Freke, Isabel Swift and Rachel Patch have all joined the agency as partners, and will be overseeing a new South East rural team, working with estate owners and property businesses across Kent, Sussex, Surrey and Hampshire. Read more

Knight Frank has also opened up a new base in York, covering a large patch of Yorkshire. Former Savills director Melissa Lines is heading up the resi sales team. Read more

Knight Frank Investment Management has expanded its team as it “targets further expansion and growth in the residential sector.” Ian Wilson joins as a Partner, with a remit to grow KFIM’s residential investment management business initially in the UK, but with a longer-term ambition to develop a European resi footprint. Xaviere Roudeix-Crouan has been brought in as Head of Research & Forecasting, and Chantal Beaudoin – who has been with KFIM since the Spring – has been appointed as Head of ESG. Read more

Boutique property consultancy INHOUS has recruited a new Director to helm its new letting service in London. Sylvie Harris has joined as Director of Lettings. She moves from developer/investor Clement-Harris, and was previously a Director at Savills in Surrey and Lettings Director at Marsh & Parsons in London. Read more

Property portal Boomin has called in liquidators after the business failed to secure new funding. All 65 employees were notified about the insolvency on 31st October. Read more

Rightmove has appointed Johan Svanström as Chief Executive Officer, to take over from Peter Brooks-Johnson early next year. Svanström was previously Global President of Hotels.com and of Expedia Affiliate Network brands. Read more

Architecture and interior design firm Buckley Gray Yeoman has made a batch of new hires and promotions, as the employee-owned trust marks 25 years in business. Oliver Bayliss has been promoted to Managing Director, while Tina Connell steps up to become Operations Director. Founding Directors Matt Yeoman and Paul White continue to co-chair the Board. Anna Woodeson has been recruited as Director of Projects, having previously been Head of Sustainability for Wilkinson Eyre. Jennifer Ball is the firm’s new Head of Communications, joins from BECG and Ballymore. In addition, Natalie Thomson has been promoted to Director of Strategy to lead on business development. Adam Wood, Brian McCarron and Victoria Cooper-Kempski have been promoted to Associate Director level, with responsibility as studio leads. Read more

The Crown Estate has made a number of significant new appointments to its London Development team. Kristy Lansdown has been recruited as Head of Development, to lead the development team in the capital. James Atherton is in as Development Director, taking responsibility for development projects across the Regent Street portfolio. And Andy Goodenough has joined as Commercial & Cost Director to drive project procurement, contracting, and commercial management for the London team. He was previously Commercial Director at Qatari Diar. Other recent new joiners to the Crown Development team include David Semple and Ines Jorge, who both joined as Development Managers focussing on St James’s in London. Read more

Debbie Lee has been named as the new CFO of Grosvenor’s UK property business, taking over from Roger Blundell at the end of the year. Read more

Triptych Bankside developer JTRE has expanded its London team again. Tom Banks has joined from Berkeley Group as Head of Marketing; Paulina Tokarska, previously an associate at Knight Frank, is the new Residential Sales Manager; Samantha Poole has moved from Barratt London to be the Customer Care Manager. Read more

Property consultancy Rapleys has “repositioned” itself in a big way; rebranding, rejigging the senior team, and refocusing the business to put residential at the heart of the operation. Nick Fell has been promoted from Head of Affordable Housing to become Head of Residential; Justin Tuckwell steps up to the newly-created Managing Partner role; Angus Irvine continues to lead the Residential Development Agency team, but now has additional responsibility for Build to Rent and Retirement/Senior Living consultancy services. Read more

AIM-listed property development and bridging lender Sancus Lending Group has named a new Managing Director to run its UK business. Richard Whitehouse steps up to the newly-created position, having been with the business since 2016. Read more