The changing fortunes of the prime London housing market 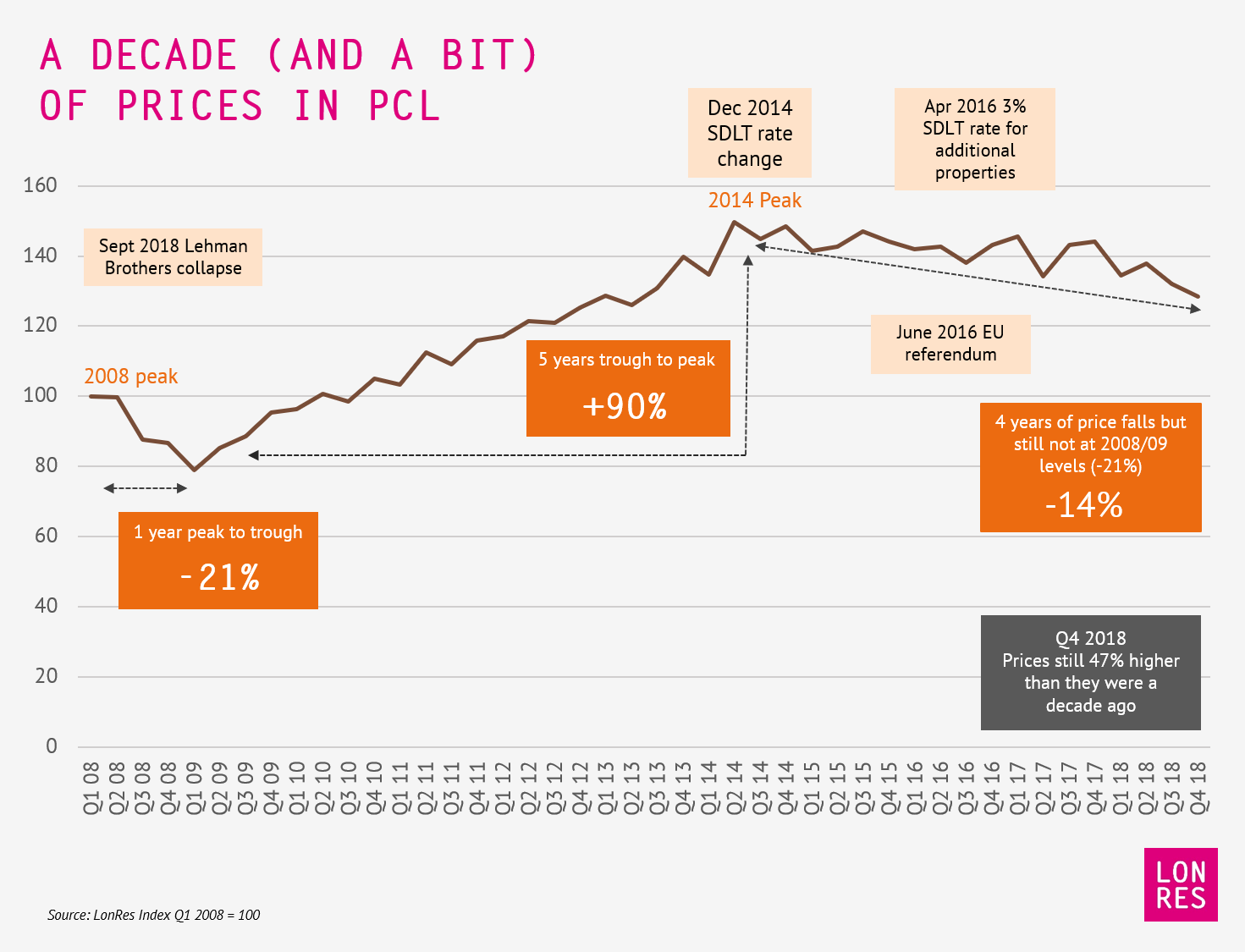 What does the chart show?

It’s easy to fixate on what’s happening now and block out the – even most recent - past.  And this is never truer than when it comes to the housing market.

In prime central London prices have been falling now for four years.  The increase in stamp duty in December 2014 (for higher value homes) signaled the end of a period of strong growth which peaked in Q2 2014.  This was a whole five years on from the previous downturn which had been triggered by the collapse of Lehman Brothers and the financial crisis in 2008.

Today’s downturn though is different from the last. In 2008 prime central London experienced a swift, sharp shock.  Prices fell from peak to trough in the space of just 12 months, wiping 21% off achieved prices by early 2009.

But the return to growth was equally rapid. A year on from the bottom of the market prices had returned to their pre-crisis peak and over the next five years grew by a further 90%.

In late 2014, the then Chancellor George Osborne, brought in changes to stamp duty, which included the addition of new bands and an onerous top rate of 12%.  The reform was aimed at cooling the market (not just as a revenue generator) and its impact led to a long drawn out slowdown.

Four years on from the peak of the market prices are, on average, 14% down on 2014 levels but we’re still some way off the 21% fall seen in 12 months post financial crisis.

How does today’s market downturn differ from the downturn following the financial crisis?

The resulting fallout from the two downturns are quite different.  Most notably, this time round we’ve seen far fewer forced sellers.  While the cost of moving has increased, the cost to a home owner of staying put, remains low.  All of which means that sellers don’t have to accept offers they feel are not as high as they’d like them to be, but instead take their property off the market if they choose.  The result has been a prolonged period of low transactions – now just half the volume compared with the 2013 peak.

What does this mean for the market going forward?

The lack of activity within prime central London over the last four years has created a significant pool of pent-up demand.  Those who have tried to sell, failed and withdrawn, together with those would-be sellers who have never even brought their home to market (instead holding out for signs of improvement) will, we expect, re-enter the market as conditions improve.

Of course the hurdles of Brexit, buying costs and additional taxation remain, but it’s worth remembering that prices today are still 47% higher than they were a decade ago, and with low levels of debt secured against property in prime central London, buyers remain in a strong position.

How can you access more up-to-date analysis and findings on London's residential market and more?